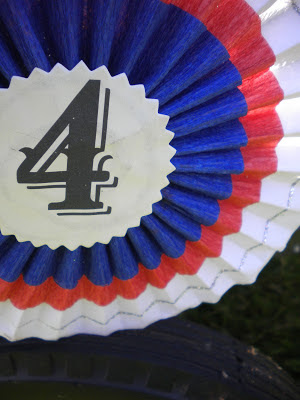 I hope everyone had a wonderful 4th on Thursday.  Ours was pretty low key, which was nice.  We met up with family at a local state park for a picnic.

One of the things I enjoy about blogging is reading about areas across the US, Canada and other parts of our world.... places that I haven't been but can see up close with a personal tour guide no less by stopping in at your or an other's blog!  So in that vein, I'd like to share a little bit with you about the state park we visited, Peace Arch State Park.  Since our family get together included family coming from White Rock BC and Edmonton Alberta.... so we all met up at the "US side" of Peace Arch Park, which for us is just about a 10 minute drive from Red Gate Farm.

If you've never traveled from Washington to British Columbia you probably haven't seen the Peach Arch located on the US-Canadian border.  The Peach Arch stands on the international boundary between the US and Canada.  It was built to commemorate the centennial (1914) of the signing of the Treaty of Ghent which ended the war of 1812.  A conflict waged in North America between Great Britain and the United States and involved our neighboring Canada as well. 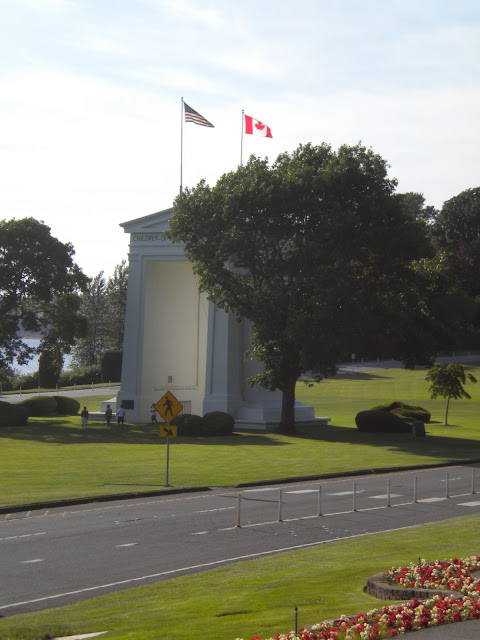 Standing 67 feet high, it's constructed of concrete and reinforced steel.  The Peace Arch is said to be one of the first structures built in North America to earthquake proof.  On the American side of the Arch the inscription "Children of a Common Mother" can be found, the Canadian side has "Brethren Dwelling Together in Unity."  But the one I remember from childhood visits is found on the east side, "May These Gates Never Be Closed."

We even have an old photo with a similar viewpoint... an old black and white tinted photo that my husband found.  Although the Arch looks the same with the two flags flying high... not much around it in the park remains. 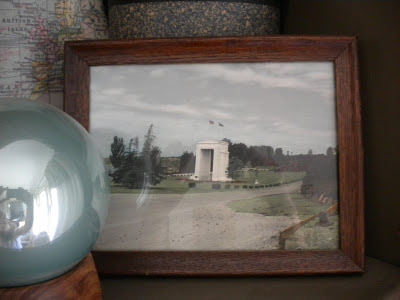 Over the years the car lanes have increased and improved with the need to flow hundreds of thousands of vehicles through the park.  The grounds here are beautiful, but I must tell you... I think the Canadian side goes just a little bit further in the grounds keeping and the beautiful flower beds than the US side... I'm just saying... Washington you need to step it up a little! 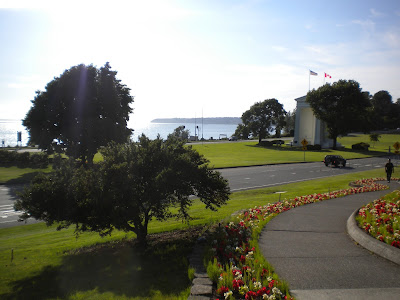 The park is a state park on the Washington side and a provincial park on the British Columbia (Canada) side, with the waters of the Puget Sound to the west.  If we'd staying long enough at our picnic we would have been able to enjoy the local fireworks out over the water 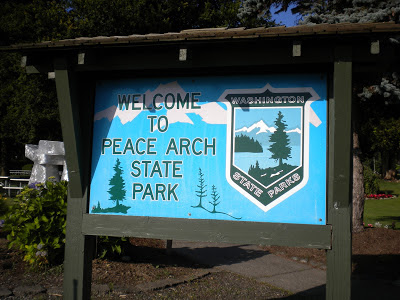 One fun thing I noticed in the US side were these rocks at the bases of the trees... painted to identify the tree type!  Now you'd think being from Washington I might be able to identify a tree or two, but nope, I can tell a cherry and a pear... that's about it for me... oh, and a weeping willow.  Show me a fir, pine, hemlock... I'm lost.  Yes, I'm the girl that once bought a spruce instead of a frasier fir for a Christmas tree... BIG mistake.  Have you ever strung lights on a tree wearing gloves and long sleeves?  Pretty much a necessity with a spruce. 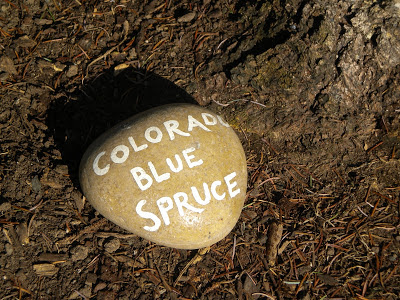 One of the best things about both the US side and the Canadian side are their "kitchens".  Aptly named the American Kitchen and the Canadian Kitchen.  Built many, many years ago they are a bit log cabinish with lots of wood and rustic details, tucked among trees and bushes in their respect park sides.

For our get together this year we were on the "US side" but have been to the "Canadian side" over the years for an anniversary party, wedding and even a family reunion.  And one other fun tidbit?  Well you can use both parks without going through customs... although I'm pretty sure they keep an "eye", real or electronic, on all of us in the parks to be sure we head home to the right country after our picnics, photos and get togethers. 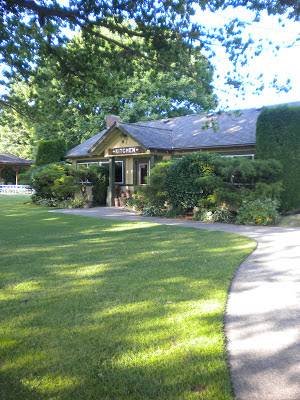 Before heading out to our family picnic... I had a little old fashioned parade of my own here at Red Gate Farm. 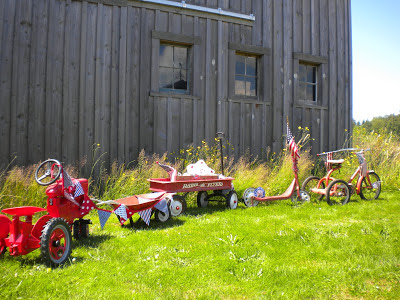 A little fun with my husband's collection of mostly vintage, ride on toys... which all happened to be red, so how could I resist? 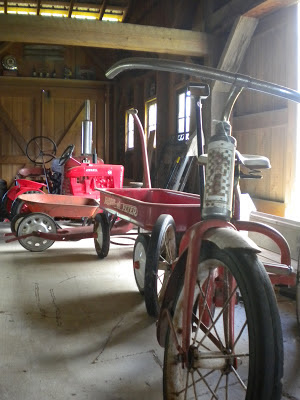 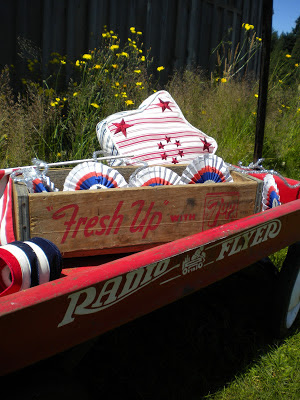 Some decorations for the tires... 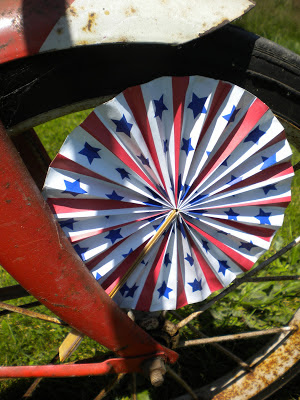 A bit of bunting and well, it's a parade! 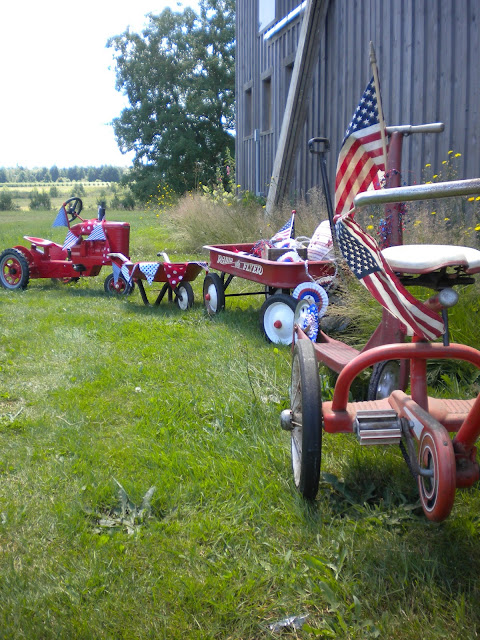 As for the flags flying on the trike handle bars... long may they wave... 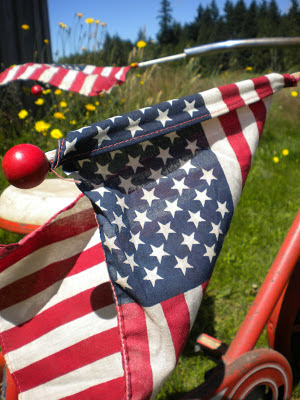 Hope you've enjoyed YOUR holiday weekend as much as I have, 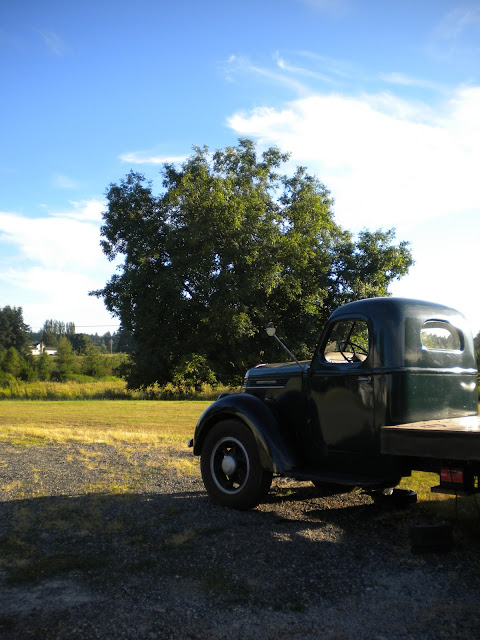 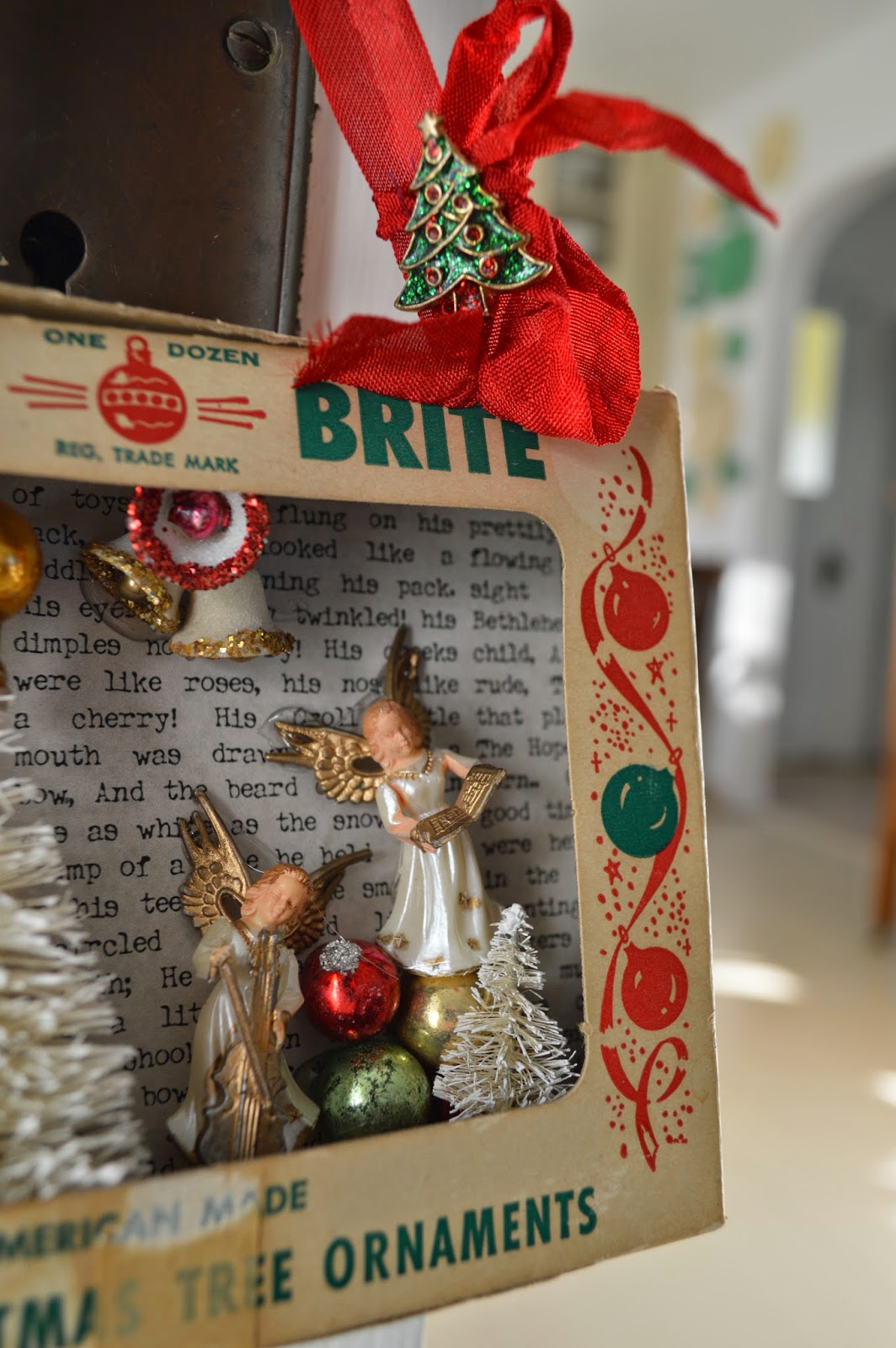